A few weeks ago I was catching up with a friend I hadn’t seen in a good while, and at some point the topic of my “”branding”” and the little guy featured in a lot of it came up. They asked about their purpose and if there was any occult inspiration behind them, as they themselves have developed a fun fascination with the subject. While this character’s ties to such things are limited [though there. In some cases I do toss in some wards, symbols, and sigils derived from my own very esoteric practice], it did give me a chance to do something I haven’t really done: discussed at length about this funny little creature. Thus here we are.


I wanted to put together this journal so I can properly introduce this character to all of you as well; who and what they are, some of their lore, their evolution over time, and the role they play in my work and day-t0-day doings. My hope is that this will provide some fun insight into the nature of some of the things I create.


Hello, This is Null 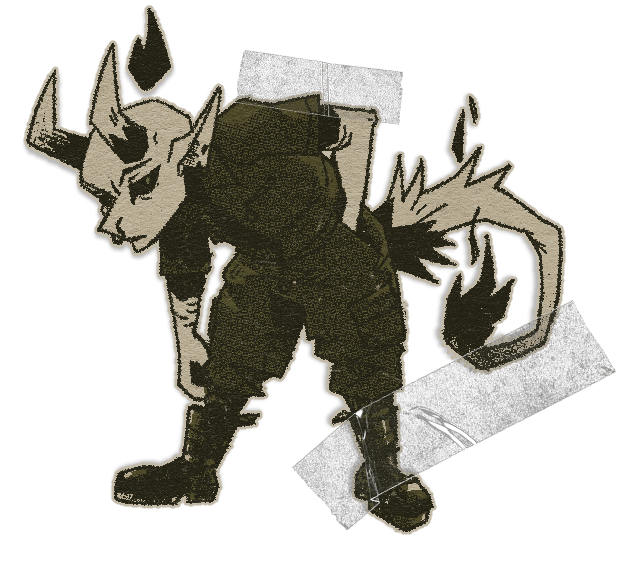 They are the little creature that appears in my logos, profile icons, so on. They are my personal persona/fursona who I use to help me better interface with various online spaces and a tool I use to explore various topics in my work in a way that I find more approachable than a one-to-one, literal means.


Their visuals are loosely based on Baphomet, more specifically the “Sabbatic Goat” image that usually comes to mind when someone mentions that name or Satan or other horned demon figures. The reason for this isn’t solely visual appeal: for someone who grew up in a very [white] Christian conservative community, adopting this “evil” image has been a way for me to embrace the parts of myself needlessly deemed scorn-worthy in that sort of environment, namely my queerness and left-leaning world view, among other things. If being myself truly is so sinful, then give me my horns and hooves. I’ll sin with the best of them. Its not a particularly unique story by any means, though I wish it were. In addition, I’ve seen Baphomet adopted in some occult-y leaning trans spaces as an icon of sorts. I imagine this is due to the figure possessing physical traits from both ends of the sex and gender spectrum as well as it being described as an androgyne in older texts in several instances. For myself, I associate the figure with androgyny and tangentially with nonbinary-ness.


Other creatures I would compare Null to would be things like fauns, ghosts or other eldritch beings, something vaguely akin to sìth but much less hostile, so on.


As for lore, admittedly I don’t have a deep, complex backstory for them. For characters I like to use to represent myself, I like to keep such things vague and fluid. Generally, they are a creature who likes to wonder between realms and worlds lonely and strange. Their home is tucked away in a quiet corner of the Voidwood—a seemingly endless landscape of fog, moss, and towering ancient flora. They can shapeshift, but prefer to maintain their more goat-like form. When stressed or tired they struggle to maintain this familiar shape and morph into something akin to a vague blob.

There were different personas/fursonas prior to Null. The one right before the first Null eventually became their own character that didn’t fit the role of a personal avatar anymore. And with that former persona being used in more narrative focused projects, younger me grew self conscious about the dreaded “self-insert” or “gender-neutral-term for mary-sue-here”, which really isn’t a terrible thing worth being so concerned about. So I sought to find myself a new figure to fill that void. For this entry I’m just going to focus on Null and their various iterations, but maybe I’ll do a different page for those who came before some other time.


NOTE: Some links will take you to a 404 page as some art doesn't have a dedicated page yet. Also I borked up the dates for late 2015 Null in the precambrian gallery. Bare with me my archive system was dreadful lol. 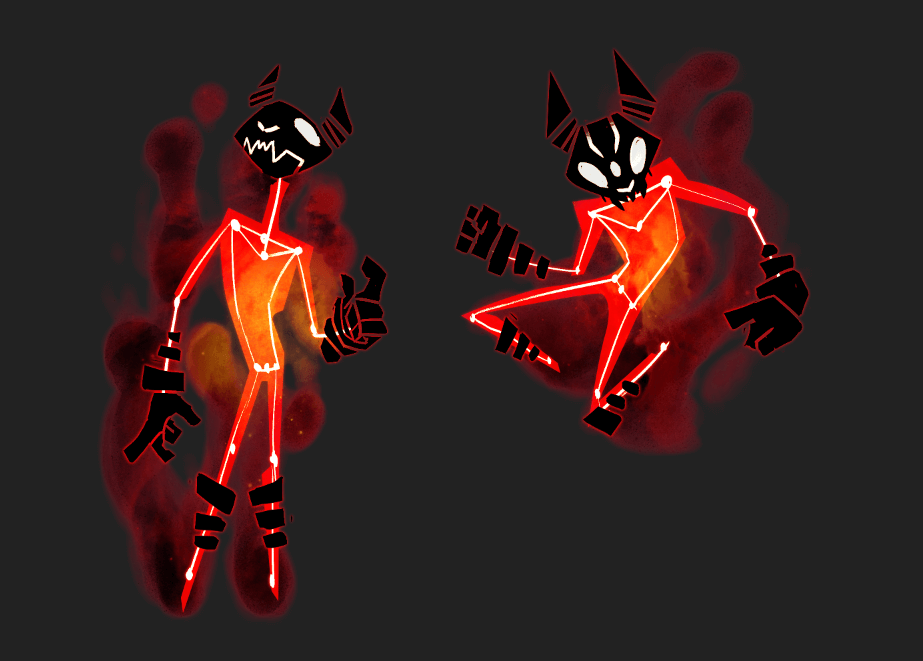 Early 2015: First version of a character named Null who I tried to use as a personal avatar, but dropped shortly after. It was a lovely design but I struggled to connect with it. They were a robo-space being of some sort. 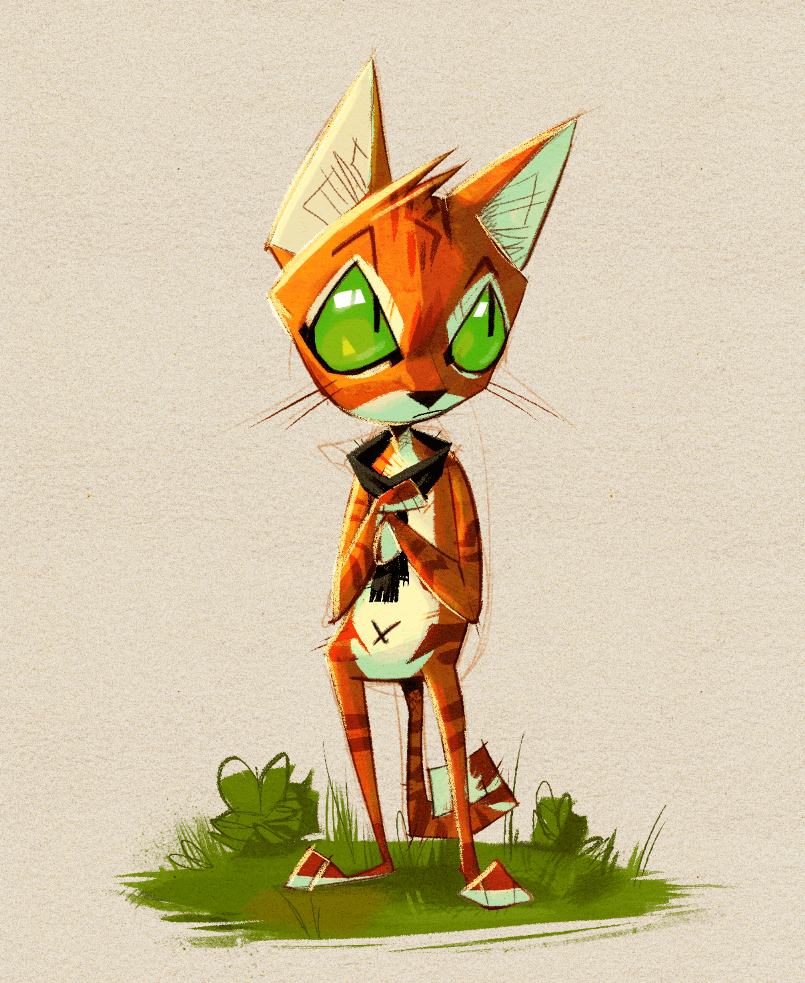 Mid 2015: Just a bright orange cat in a black scarf. Also didn’t stick around for long for similar reasons as the previous version. And for being a bit too generic/sterile I guess, a choice done out of fear of being too expressive I’d assume. You could also tell I was having a turbulent time trying to find something that “fit” by just how rapid and drastic the redesigns of 2015 had been. 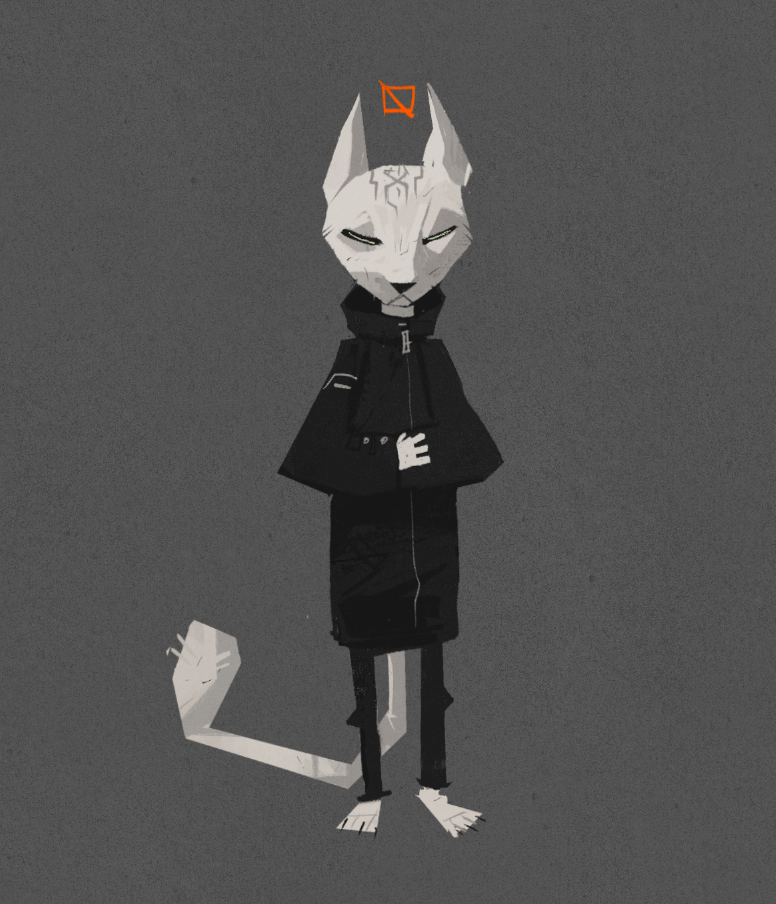 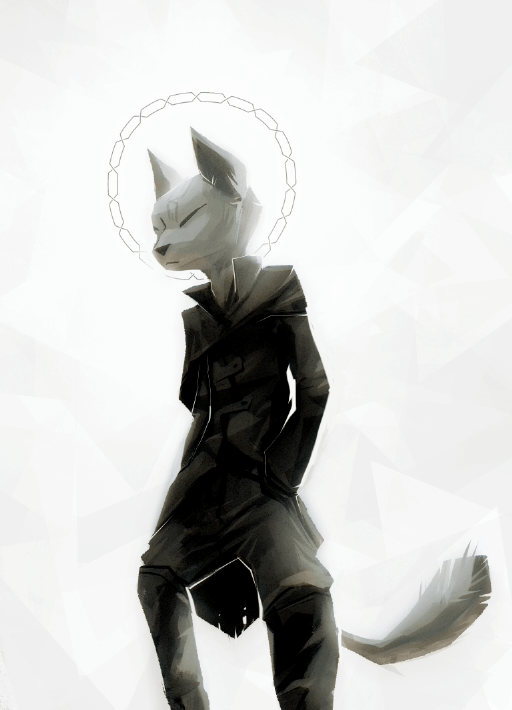 Late 2015: Got back to something that was a little less boring. This Null and 2017 Null both have shut eyes as their thing was being a ghostly entity who was almost always “sleep walking”: seeing both the realm beyond and the world of the waking. The marking on their head is derived from a personal symbol library I made years back, this one loosely meaning something like “unity”, “forever binding” [in a relational or romantic context], so on. I had also developed a renewed interest in occult and occult-adjacent topics and practices. No goat sacrifices and running nude in the woods under a full moon here I’m afraid [I’d rather not get Lyme, thank you], but more along the lines of sigil crafting, auto drawing, etc. 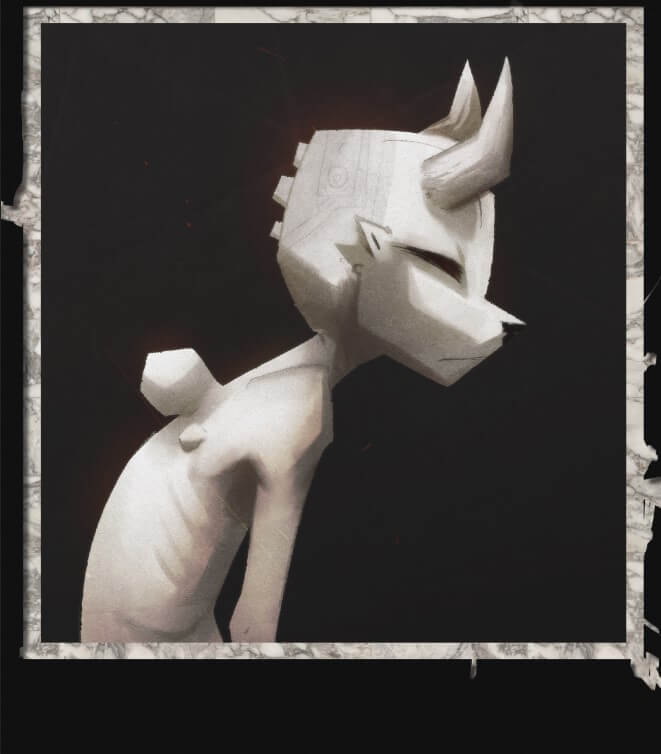 2016: This was around the time I made the doodle where 2016 Null’s ears ended up looking more like horns, and I then explored that further. Along with being some kind of ghost-like creature, they had mechanical/cybernetic components as well. Its a concept I carried over from pre-Null ‘sonas, but ended up dropping as I found the shapeshifter aspect more in-line with the relationship I had with my body and identity at the time, and to some degree now. This Null also introduced a ‘greater form’, which acted as a better version of the self to attempt to achieve, and which shifted and changed with time. 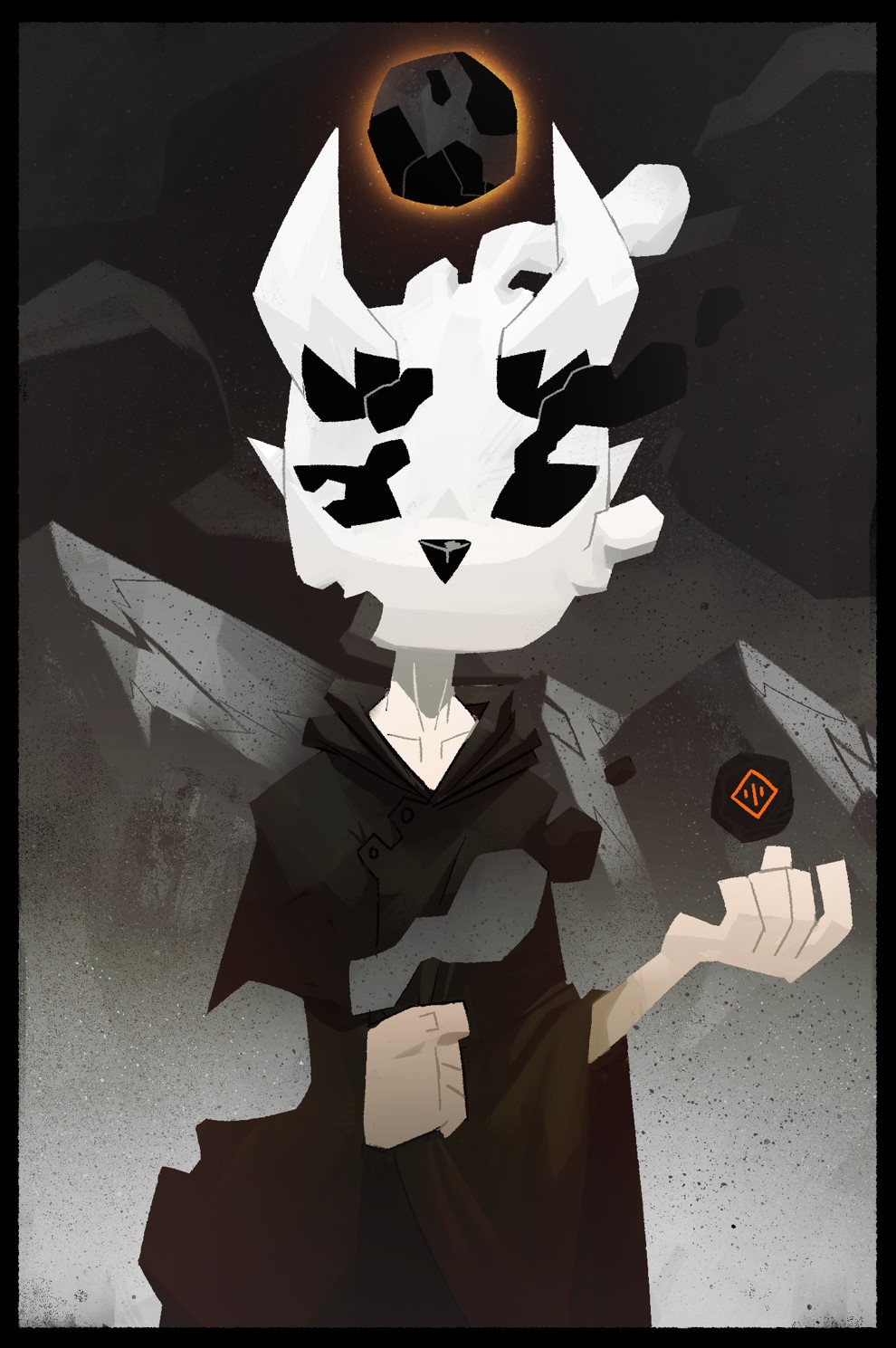 2017-2020: I ended up dropping the shut-eye motif as, turns out, its difficult conveying certain expressions when your subject is always sleeping. 2017-2020 Null also rid most of their feline characteristics and leaned more into the loose Baphomet-like visuals. The knapsack was a reference to the tarot card The Fool, as I felt it was fitting for what was going on in my life at the time.

2021: The most current design as of this writing. Null’s dropped pretty much all of their feline characteristics, swapped soft ghostly blobs for sharp flames, and wields a staff-and-lantern that helps them find their way instead of the knapsack of miscellaneous things.


A Tool for Exploration


Beyond just a fun way to interface with others online or interesting logo fodder, Null has been a useful mask for me to wear to process and explore various topics in ways that feels more honest than had I used some other means. They are a reflection, a doll who I can vicariously explore new ways of self expression that would otherwise be unsafe or extremely difficult to do in the flesh, and then incorporate what works into various aspects of my life. The SINOTAPH series [ongoing] is a more overt example of this in action, and to some degree That Other Realm. The Oscar Wilde mask quote feels tangentially related to this situation, at least out of context.


Could taking a photo of myself achieve the same? I suppose it would be more “realistic”, but I find I have an easier time expressing an emotional truth through a medium much more fantastical. In turn I like to think this mode of self expression helps me find “my folk” and fellows of a feather more effectively.


Also its fun as hell to masquerade as a funny critter person, earnestly and lovingly crafted to showcase the aspects of oneself in a way no other means could.

I hoped this proved to be mildly interesting read at the least. Do you engage in a similar practice? If not, how come? As always, you can always reach me via my socials, particularly my Mastodon or e-mail.